T.OS, claiming cryptocurrency with the actual transaction, held ‘T.OS Meetup 2018 in Seoul’ on the afternoon of June 19 at the Oakwood Premier COEX Center in Gangnam-gu, Seoul.The event was organized to introduce the features and services of T.OS Coin, which T.OS is preparing for service, and the roadmap for the future with T.OS executives and officials from related industries such as affiliates, exchanges, and consulting firms attending.

▲ ‘T.OS Meetup 2018 in Seoul’ was held with great success.
In the first order of the event, Morihisa Baba of T.OS Japan gave a welcoming speech.Baba talked about the current situation by saying, “T.OS coin is a cryptocurrency created through cooperation between Japan and Korea, and has been showing the functions and possibilities of T.OS coin in many countries since 2017. The popularity of T.OS has continued steadily in many Asian countries, and many people also in Korea trusted the vision of T.OS and invested.”Also, he emphasized that T.OS not only brings up the slogan, but also knows well about showing its technologies with results rather than just talking. And he said to try the best to delight customers through T.OS coin, which can be used in real life. After a welcoming speech by Baba, Faruk Tercioglu, president of Knockcoin Exchange in Singapore, which was selected as the first exchange of T.OS, presented the features of the exchange and the possibilities of T.OS.Tercioglu introduced that after launching on May 28th, Knockcoin Exchange is conducting strict personal protection policies and court proceedings in order to concurrently list cryptocurrencies such as bitcoin, ethereum, litecoin as well as T.OS coin on June 22. In particular, he mentioned an advantage that since Singapore government has a strict law on financial services, it will be a safe and reliable investment for investors. In addition, he analyzed the strengths of T.OS that it is optimized for real life payment functions and it also has strengths in payment and purchasing through stability and rapid trading through its internal coin called T.OSP.

▲ President of Knockcoin, which is the first exchange of T.OS, presented about the possibilities of T.OS.
An official of the first affiliate who decided to introduce a T.OS payment system also visited Korea and gave some impressions. Akimasa Yasumodo, CEO of Kento’s group, who runs Kento’s, a famous live house in Japan, expressed his impression about visiting. “I heard that today's event is the first event to be held in Korea, and I was very surprised that there are many people who support T.OS in Korea. I thought that the heat in Korea was as great as Japan.” He also said, 'Kento’s is honored to be chosen as the first affiliate store of T.OS as a Live House brand that has a wide range of customers from 20s to 50s. I would like to ask for cooperations so that we can lead the bright future with T.OS.“

Eriko Tachibana, CEO of management consulting firm ‘Tachibana Eriko office’, said, “Since many investors in Korea and Japan have skepticism on stability due to hackings of the cryptocurrency exchange, T.OS is improving security perfection through a series of security tests by inviting the world's best white hackers. Through these processes, T.OS has become the safest cryptocurrency for payment in the world, and I believe that T.OS is a company that regards its commitment to investors as the most important.”

▲ The official from Kento’s group, which is the first affiliate of T.OS, gave his impressions.
At the end of the ceremony, Wook-tae Kang, CEO of Blockware, in charge of technology of T.OS, presented the technology and roadmap of T.OS.

He first expressed his gratitude to investors and supporters, and briefly introduced his activities so far that he was constantly developing technologies and at the same time promoting various activities around the world to raise awareness and value of T.OS. In particular, at the technical seminar held in China, he conducted a news interview to introduce the strengths of T.OS. The launching event in March confirmed the expectation for T.OS through the participation of about 200,000 people from 80 countries.

In the case of cryptocurrencies that have appeared in the past, transactions are made under the name of ‘money’, but because of problems such as processing speed, the role as an actual money such as payment or remittance is not properly performed. Also, he pointed out that a credit card-based payment service has a disadvantage of high commission from operating costs.

To do so, T.OS announced that it plans to launch the payment system in the second half of the year, test the actual transaction system through some merchants, including Kento’s, and plan to launch a public service in the first half of 2019.

At the same time, T.OS will show its own communication-based hardware wallet, which does not use internet protocol, as an order-made method, so that users can more safely protect their cryptocurrency. Also, after primarily developing 10 to 20 global exchanges, it will operate a cryptocurrency consulting and franchise and plan to make each country's exchange a base for the T.OS payment system.

By concluding the presentation, Kang said, “T.OS will continue to strive to reward enthusiasm for many investors as well as become the key currency of the world's cryptocurrency. I would like to ask for your support in the future.” 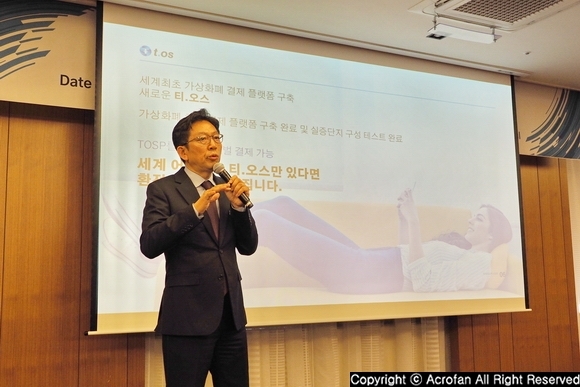 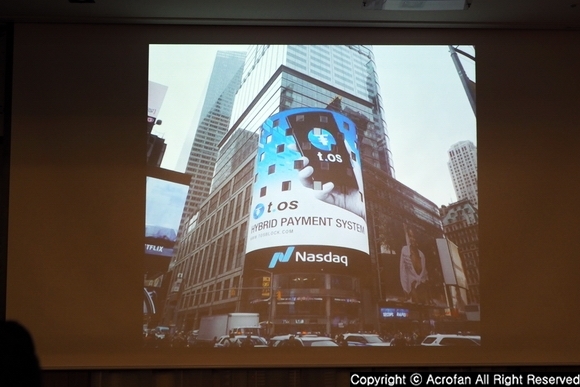 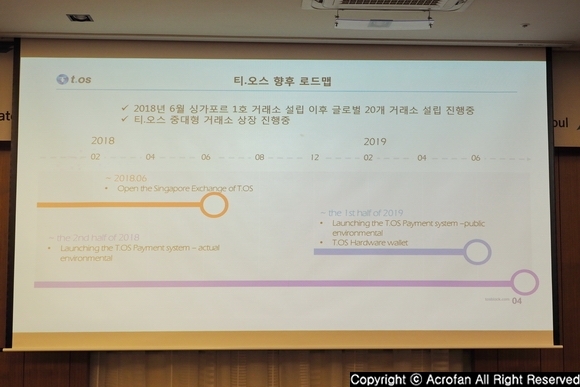 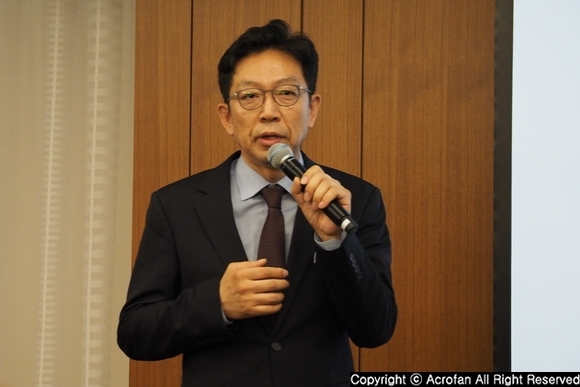